During the early spring of 1996 meetings were conducted by Warren County Judge Executive Mike Buchanon for the development of a Drug Task Force. These initial meetings included all police administrators with jurisdiction in Warren County. Once a consensus was established by these police agencies, the Judge Executive contacted then Kentucky Secretary of Justice Dan Cherry for his direction. 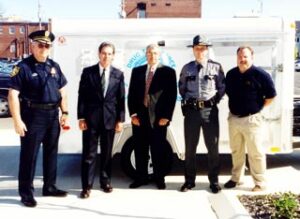 These initial meetings indicated the need for additional chemist services. The chemist would be dedicated to test all drug cases generated by the task force with a secondary responsibility to test other drug cases originating from Bowling Green and Warren County. An agreement was made with the Kentucky State Police Forensic Laboratory Section to provide this service. It was also determined that a dedicated prosecutor would be needed. This would speed prosecution and lower costs to county government. An agreement was made with Warren County Commonwealth Attorney Steve Wilson to facilitate this contract prosecutor.

During the late summer of 1996, a plan was finalized and presented to Kentucky Secretary of Justice and his staff for the possibility of grants. The Justice Cabinet agreed to fund 75% of the cost utilizing the Byrne Grant with local government funding the remaining 25%. The Warren County Fiscal Court agreed to be the recipient of the grant and manage its funding through the County Treasurer’s Office.

On January 1, 1997 the Bowling Green – Warren County Drug Task Force officially came into existence. Thomas M. Loving of Bowling Green was selected as the Director and began to set up operations. It was temporarily located in the offices of the Kentucky State Police Drug Enforcement Special Investigations. The task force moved in late February 1997 to its own quarters. The Warren County Fiscal Court furnished funding independent of the grant to remodel the “old jail” office and living quarter’s section for the task force offices. The task force continues to operate from this facility.

By February 1999, each Detective had a networked computer with access to the Warren County Government System and the Kentucky State Government information highway.

In October 1999, our first auction of forfeited property was conducted. This was a joint auction with the local post of the Kentucky State Police. A total of nine vehicles, various items and a farm were sold at public auction. The proceeds of this auction were used to purchase new electronic surveillance equipment, a vehicle and a new telephone system for the task force offices. A reserve was held in the “forfeiture account” for additional law enforcement equipment as needed.

In November and December of 1999 the first three “Meth Labs” were located in Warren County. Methamphetamine Labs continue to be located at an epidemic rate jumping from 14 in 2000 to 36 in 2001.

Congressman Ron Lewis was instrumental in securing a $250,000 Methamphetamine Initiative Grant for the Task Force. Two additional vehicles, much needed safety equipment and 5 trailers to transport the equipment to the Meth Labs were purchased. This grant also paid for additional training of the Meth Lab certified detectives and Meth Lab cleanup and disposal cost.

Through Bowling Green Police Chief Gary Raymer’s efforts in 2001 the Drug Task Force became a founding member of the newly formed I-65 Drug Intelligence Group. This group meets quarterly and is comprised of all law enforcement agencies dealing in drug enforcement from Louisville to Nashville near I-65.

The Drug Task Force consists of a Director, two detectives from the Bowling Green Police Department, two Detective Kentucky State Police, two detective from the Warren County Sheriff’s Office, one detective from the Western Kentucky University Police, one Investigator from the Office of the Attorney General, one Investigator from the Cabinet for Health Services, Drug Enforcement Branch and a administrative assistant. One Special Agent from ATF and one from the FBI. The grant funding pays the coordinator and administrative assistant’s salary. The grant also pays the salaries for the Chemist and Prosecutor by contract to their immediate employer. Each detective salary is paid by his home agency. 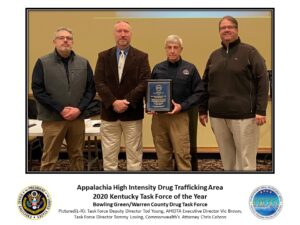